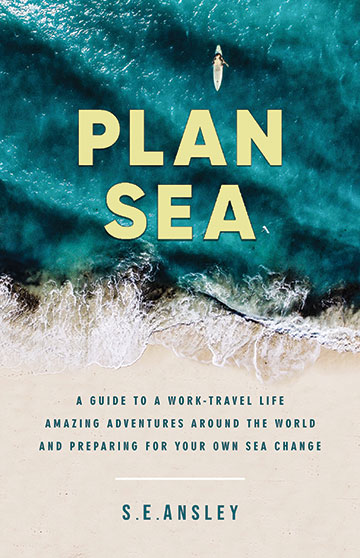 A guide to a work-travel life, amazing adventures around the world, and preparing for sea change. More than ever we need a backup plan that will come through. Plan Sea is available internationally in hardcover and paperback print editions, Deluxe eBook and forthcoming Audiobook.

Plan Sea prepares for the unexpected, with back up plans to ensure safe and seamless travels and survival.

Despite setting out on a "short" 3 month trip, Sea has since given up Melbourne life entirely, still traveling indefinitely - presently locked down in Goa, India. The past 3+ years of adventures have taken Sea through Europe, an unexpected spiritual journey through India, the magical utopia of Auroville, three Burning Man events, South Korea and South East Asia, from camping at beaches, national parks and a Danish quarry, to penthouses in Amsterdam and the Czech Republic, underground clubs in Berlin, mountain lodges in Poland, beach villas in Sri Lanka, and sleeping on the streets of Seoul and Amsterdam. 25 countries in total. All on a budget of less than $200 per week.

Sea shares his core life and travel tips, demonstrating their impact along the way. The book covers trip planning, finding best deals on transport and lodging, running multiple projects on the road, emergency money and cryptocurrency, long distance relationships (and break ups), and how travel makes a lasting impact on one's own place in the world. With deep, intimately personal stories across over three years of spontaneous travels.

Ready for your own sea change? It starts with a dream, and making the first plans for your one way ticket to adventure.

S.E. Ansley (Sea Ansley) was born in London to a Canadian mother and New Zealander father, grew up in Singapore, and has lived all over the world. In 2014, Sea's life-changing world trip began with an epic three month voyage through South America and his first Burning Man, before visiting six continents in the years since.

A web developer freelancer and consultant since 2000, Sea is the founder of Mother.Domains, Universal Metropolis, UMFM Radio and GASHE, and lead writer and editor of DigitalNomad.Blog. He was an early pioneer of Internet radio and live/virtual festivals and events. His music production acronym is ANIMISM, and is founder of the Sun Moon Sea peace orchestra. Sea lives a flexible, adventurous, lowkey lifestyle, while maintaining numerous projects on the road for 7+ years. Sea is a daily Vipassana meditator.

Plan Sea is Sea's second book, following a satirical novel about a utopian city of dogs published as an 18-year old. He is currently working on the sequel, in cinematic and orchestral form, The Dogs Live On, and next up is an electronic music album and live tour.

Sea's mission is to help elevate consciousness in society and work towards a more peaceful, fairer world for us all.

Curious about Plan Sea the book?

Questions? Ideas? Interviews? Need creative consulting? Feel free to contact me for just about anything.